Sadly we had to say goodbye to Donna in April with a suspected brain tumour.

​​1st May Dot gave birth to two handsome boys........
Phoebe (Clumber)  had two health scares..... In June she was admitted to the veterinary hospital with Pancreatitis (she is now not allowed any food with a fat content higher than 7%), and then in October she was back in hospital with a Pyometra!! BUT apart from this appears to be in good spirit!!!
​
In December Dot had a go at hoopers with  A to Zooom and loved it.......

October 2016
Dot wins her first CC at Driffield Championship Show under breed specialist Barbara Milton. So proud of her. My thanks to Barbara for thinking so highly of her and to all her supporters and groomers who made it all possible, and of course to Dottie  who went out there and showed her socks off.....

August 2016
Phoebe takes the bitch RCC at Welsh Kennel Club under judge Mrs C Coode. The following day Phoebe and Donna enjoyed off lead running on the beach at Oxwich Bay. It was lovely to see them enjoying themselves although at the time I did wonder whether they were going to come back. I wasn't brave enough to let Dot off.... think we would still be waiting for her to return!!!!!

May 2015
Dot becomes a regular visitor to Lewin House nursing home. She soon became very popular with both patients and staff, and she loves her visits.

April 2015
WELKS
Well done Phoebe  on taking the bitch ticket at WELKS under breed specialist Carol Page. Thank you Phoebe for being such a pleasure to show and Carol for thinking so highly of my girl and making me one very happy person!!

March 2015
Crufts!!
Phoebe (Tioga Magic Spell) was placed 3rd in the  Clumber  Limit bitch class and Dot (Tioga Dot to Dot) won the GBGV Post Graduate bitch class. Thanks go to my girls for showing so beautifully, to the judges Mrs Gina Bowers and Mrs Jan Pain, and to Ann Dormer of A to Zooom for all her help, support and training advice. 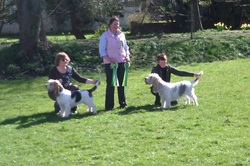 22/03/2014
Dot is reserve best GBGV bitch at the BGV Club Open Show. My thanks to our breed specialist judge, Fiona Buchanan.
(Pictured here with the judge and best bitch, Barbara's Fancy)
07/03/2014
Dot's first Crufts where she was awarded 3rd place in the breed junior bitch class. Gavin Robertson, the judge gave the following critique:
"Super head and expression with lovely long ears, good bone, up to size. Needs to develop in body and spring of rib, nice quality but needs time".
She showed like a dream. Huge thanks to Barbara Milton for giving me a Domino baby, and then for all her support and advice!  Thank you also to Ann Dormer of A to Zooom who has been responsible for her ring training, and was waiting in the wings to take over from me should my knee have failed me.